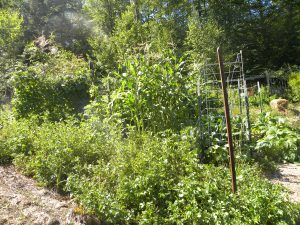 During our cold New England winters, I take time to review and assess the year that has passed. We just completed our harvest tallies, this is a good moment to reflect.

Many have been analyzing 2020 from multiple perspectives. From a homestead focused point of view, I have to title this the Year of More Drought (2016 was already the Year of Drought). Beyond that, I’d say it was a Year of Contradictions, when we felt both more isolated from people yet aware of how connected we all are and when we had a stronger sense of the importance of our work localizing food production even while weather conditions made it harder for us to succeed.

I’ll start with some overviews then share our totals with you. As in my 2018 and 2019 reviews, I’ll focus first on areas where we had problems this year or in the past.

I am happy to report that we had another good seed starting year using the commercial but peat-free seed starting mix from Organic Mechanics. I still have a longer term goal of making my own very locally sourced mix but have let that go for the moment. The failures I did have were in the brassica category (broccoli, cauliflower & brussels sprouts) and those were due to my attempt to use up some older seed. Yes, I already ordered new seed of these for the 2021 growing season!

Our experience in 2020 was of moderate pest pressure. At first, there was very little, but as the drought continued, more creatures were driven towards us, and our plants were less able to defend themselves. Our summer squash was taken down early by squash vine borers, Colorado potato beetles began to get out of hand, and voles spent more and more time in our root crops. Also, a flock of goldfinches managed to open up and eat almost all of our corn (popcorn and dent corn). I could have brought the corn in earlier but didn’t realize what they were up to – we’ve not seen that here before.

Having enough time and energy to get tasks accomplished will likely always be a challenge. I did plant less of some labor intensive crops – especially snap beans – and I decided to be more willing to share with our animals if I was overwhelmed with produce. Honestly, what really helped was our reduced yields because of the drought and that I had extra food preserved from our great year in 2019 so didn’t need to do as much canning, freezing and drying. 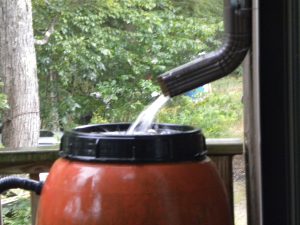 Rain Barrels Were Not Enough in 2020

The drought that began in early summer and extended through the fall was our biggest challenge.

We are grateful to have found and implemented permaculture methods that make us much more drought-tolerant especially by creating healthy soil… but there are still limits to that. We can water the garden to some extent, but not enough to make up for extended dryness. The rain barrels and ponds can keep us going for a couple of weeks, but after that we are drawing from our well which we also need for our house supply. You can see in our produce totals how yields were down in many categories, some from the lack of water.

We now have plans for more robust rainwater storage systems. Those 50 gallon rain barrels seem very undersized now that our climate is changing so fast.

One newer practice that really helped was our urine diversion system. The real point of it is to capture the nutrients in urine for a natural fertilizer for our landscape, while keeping those nutrients out of water bodies where they are damaging – but all that liquid was a huge bonus. The fields where we were most able to apply it stayed green and lush in comparison to other areas. 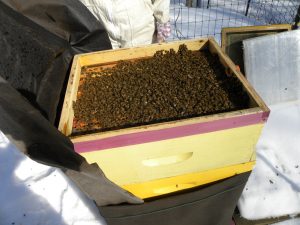 We were off to a good start as we moved towards the spring.  All 5 of my bee hives were alive and well and growing so fast I harvested some spring honey when I ran out of equipment. It was especially heartening to have such success as life in the wider world became scarier.

However, the bees are hit hard by drought leaving them without the amount or quality of forage they need.

I fed them sugar syrup to keep them going and allow them to stock up for the winter, but they have less chance of making it through the winter with sub-par food stored. 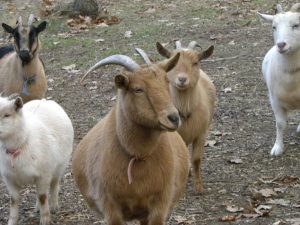 Unfortunately, we also had our first difficult birthing year with our goats, the one I’ve been dreading all along. We only had two pregnancies.  Georgia had no problems, Honey, however, had a kid get stuck and we could not manage to correct his positioning. We had a vet come to help us but he couldn’t save the two boy kids. Honey had a rough time recovering, but she pulled through and is back in charge of the herd, bossing the others around. I felt SO terrible and upset by the whole incident I seriously questioned whether or not we should keep doing this – maybe I am not skilled enough at dealing with problems to be keeping animals. My goat mentor had some encouraging words, though. She reminded me to consider the many days of healthy, happy living that we arrange for them, which commercially raised animals in this country almost never get a moment of, rather than only thinking about these few bad days. So, we bred again this fall (Cocoa, Luna & Lily) and expect three births in the spring. I’m already nervous! It’s tough – I believe that only people who feel deeply and will cry over animals should raise them – but it’s challenging to be that person. 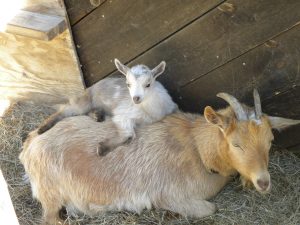 We did also have a situation with Georgia’s kid. At about a week old she fell into our swampy area. We didn’t want her to stay muddy and wet so we cleaned her up… but then her mother rejected her, we assume because she smelled “wrong.” She looked the same and sounded the same, but then Georgia would give her a sniff and shove her away. Steve did research and worked with them, holding Georgia still so baby could nurse.  This shifted her scent back to what Mom would recognize. It took about a week, but was a complete success! I have no interest in bottle feeding animals, so it was a huge relief. 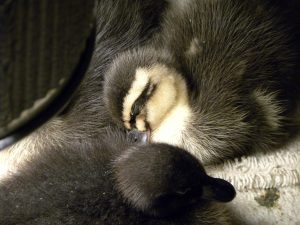 This was the year we received a batch of Indian Runner ducklings in the mail again in order to acquire some new genetics for our flock. If they are being shipped there is a minimum order of 12 and that was a lot of ducks to raise in my tub! They did well and we now have 2 new drakes along with our 7 female ducks.

Our chicken hatching and raising also went well, although our drought-stressed pasture was having trouble recovering in time for the next rotation of birds. Also, we had significantly more roosters than hens hatch this year, which was disappointing for some friends who wanted to add to their flocks. Most of the hatching happened in the incubator as our broody girls had minimal success. One mom did sit long 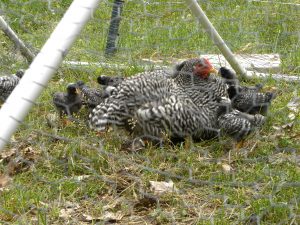 enough, but only 2 of those eggs hatched. At least I timed it properly so that I could slip some incubated chicks under her, allowing more to be raised outside by a mom. 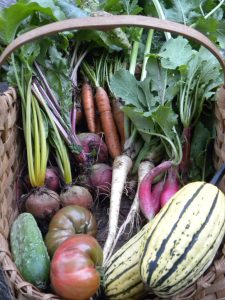 So, after putting in all that work, how much food did we get? The numbers are only part of the story as we think the quality of the food, the satisfaction of living this way, and the many ways this helps us live more ethically and lightly on the planet are a huge part of the reward. Still… we have to get energy back for the energy we put in. Here’s what we tracked (note that this is what came into the house to be weighed so misses what we directly tossed to the animals or what Steve ate in the field), with some comments added:

Corn, popcorn – 2# (all I rescued from the goldfinches) 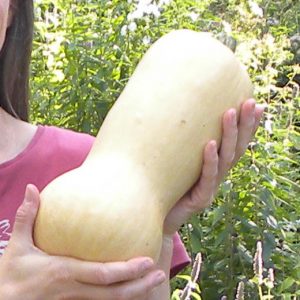 Honey – 50# (taken in the spring when they were bursting, before any sign of drought)

2020 was a reminder of the limits of our control and even our ability to know what’s coming next in the world. However, planning is a critical skill in permaculture and farming. Timing matters, especially in a northern climate with a short growing season.

So… we are optimistically planning to repeat our routine of plant care and animal raising without many changes this season. We already put in our seed and tree orders with Fedco (good thing, since they now have waiting lists and already sold out of many items) including a few new crops to try. I’m attempting wheat again this year, we are going to try alfalfa as a cover crop, and I’ve ordered two new potato varieties: prada and satina. Improving our rainwater collection system will be the big project of the year.

I also intend to keep writing, so I’ll see you here again! 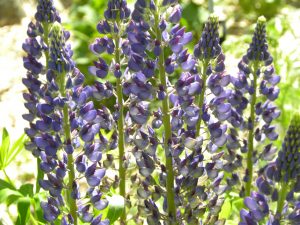 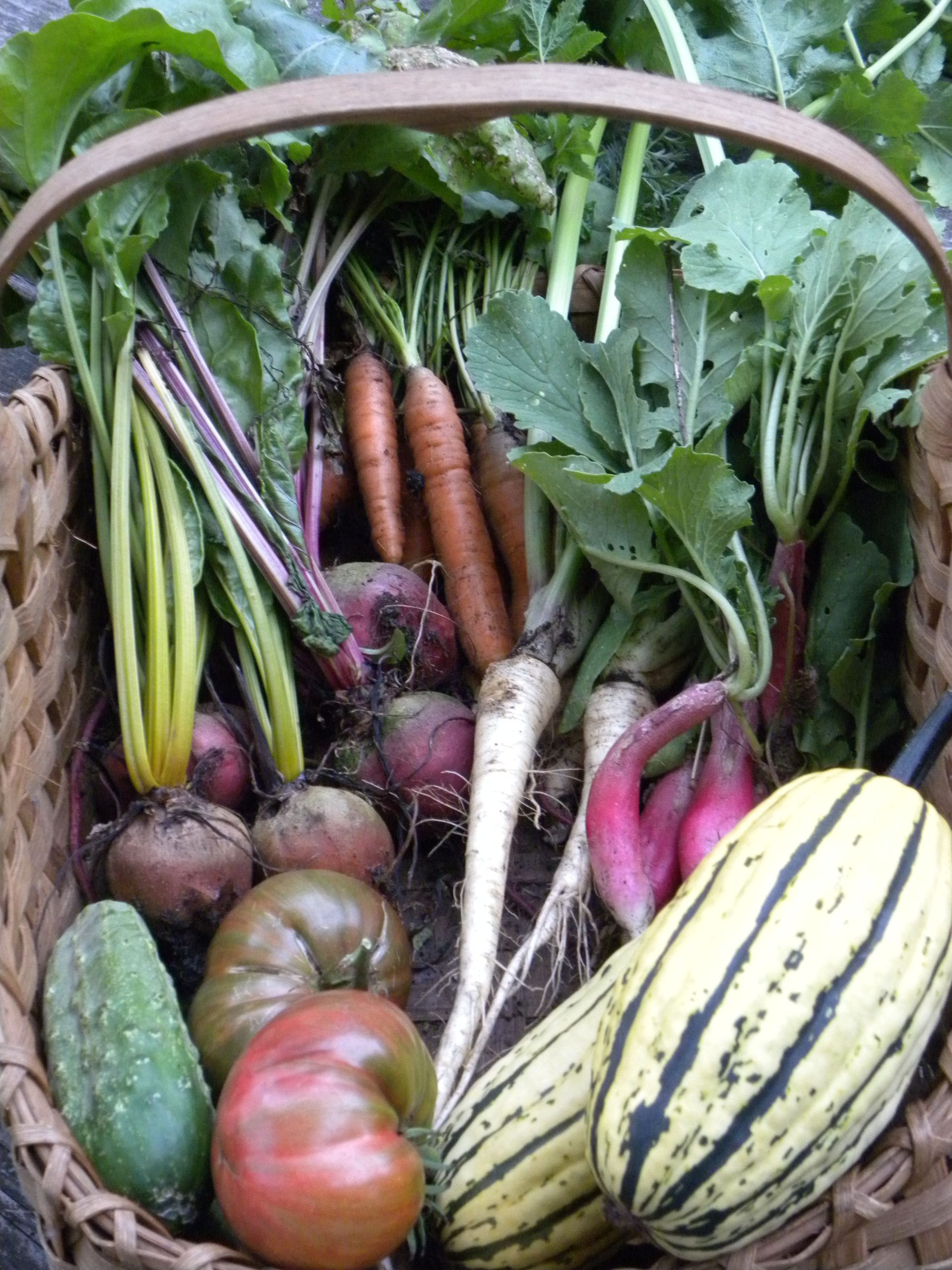