Speaking for the Bees 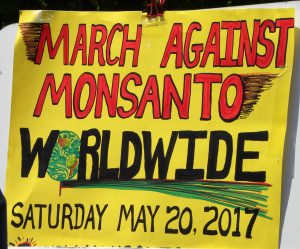 [Note: I gave a version of this talk at the March Against Monsanto Rally in Concord NH on May 20, 2017. This was also the day after the news broke that NH lost the majority of it’s honey bee hives over this past winter.]

I am here today to speak for the bees and the beekeepers.

As a chemical-free, permaculturally-based beekeeper I am extremely careful about what I put into the hive. But being a steward of bees means knowing the limits of my control over the world. That’s why I need all of you to help me and my bees.

A bee can travel as far as 5 miles from her hive. That’s 50,000 acres of land that she can cover – far more than I personally can protect for them. Any harmful substance that she contacts she will bring home to her hive where the queen is laying eggs, the next generations are being nurtured and they are creating their magnificent honey. What they bring back will have consequences for all those activities.

I received my first package of bees in 2005, so when the Colony Collapse Disorder news hit in 2007, I started getting questions about bees, most of which boiled down to: “What is the thing causing bees to die?”

I’m not sure what it is about humans, or Americans at least, that makes us crave simple answers. But, I don’t believe that thinking is helping us and I am not here today to tell you one or a few simple tricks to saving the bees. Instead I want to tell you a story about bees, humans, how we got here and how we might walk a better path for all of us.

It is still a simplified story, from the perspective of one human (me) who works with one type of bee, apis mellifera, the honey bee.

Let me tell you more about bees, to make sure that all of you are amazed and in love with them and the sweet, beautiful world they contributed to making.

The honeybee is just one of at least 20,000 species of bees. Bees began evolving about 100 million years ago, when wasps and flowers shifted their relationship from one of predator and prey to one of not just cooperation, but of symbiosis – they need each other now. Forming this partnership, called 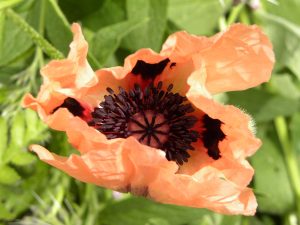 The Angiosperm Explosion by botanists, resulted in a tremendous increase in plant and insect diversity and, in our human eyes, beauty. (Iris Murdoch said: “People from a planet without flowers would think we must be mad with joy the whole time to have such things about us.”)

By now, 2017, there are over 200,000 species of animals that act as pollinators. Most of those are insects, with bees pollinating the largest number of plant species. There are others, though: birds, bats, and even some mice!

The fact that there is such a diversity of pollinators in existence, tells me how important they are. This is a job that cannot be left to just a few. We are lucky that this redundancy and resilience is built into the system given the losses that have occurred or might happen, but it’s time to heed nature and learn to respect and protect them.

There are now 8 bee species on the US endangered species list (7 in Hawaii plus the Rusty Patched Bumblebee). Even more disturbing, a study released in March 2017 by The Center for Biological Diversity found hundreds of North American bee species now face extinction. The reason for their decline is believed to be the complicated interplay of: loss of habitat, pesticides, diseases/parasites which move easily around the world with our current transportation system, and climate change.

But, let’s take a small step back… the trouble for our bees did not start in 2007.

The best way to track this would be by looking at colony losses over time or wild bee numbers, but that data isn’t available going back very far.  We do have information about overall colony numbers in the US going back to the 1940s, which American entymologist & MacArthur award winner, Marla Spivak, used to piece together at least a part of the story.

Spivak pointed out that honey bee colony numbers have been declining in this country since the end of World War II. In 1945 there were an estimated 4.5 million managed honeybee hives in the US and in 2007 that number had fallen to 2 million – despite an increase in crops planted that need insect pollination.

A number of changes occurred, one being World War Two’s legacy of dangerous substances and technologies which we are still dealing with.

As a permaculturist, I am all for turning problems into solutions. But I am really coming to question the idea of turning swords into ploughshares in any literal sense, especially given the research showing the plough to be one of our oldest, ongoing agricultural sins.

Of course, these corporations were concerned with profit not peace anyway. Rather than shutting down their war-making factories in 1945, companies including Monsanto managed to keep running by setting their sights on a new target, and a chemical-dependent agriculture system started to take over. A DuPont Farm Chemicals brochure from the 1950s told us outright: “Man against the soil… rise from savagery to civilization.”

This new system concentrated crops into huge monoclutures, which could not support pollinators, but did create the opportunity for certain crop eating insects to proliferate in an out-of-balance manner, leading to a huge call for pesticides. With synthetic fertilizers now cheap and available, the practice of cover cropping, which had been great forage for our beneficial insects, diminished. And abundant herbicides meant weeds could be eliminated in crop fields and at our homes – but

many plants we call weeds are great food for many insects. (Let your dandelions grow!)   (See Marla Spivak’s TED Talk for much more detail on the post-WWII agricultural shift)

In his book Natural Prophets, Joe Dobrow describes our culture as we came out of that war as encouraging social and political conformity, respect for authority, patriotism, faith in science and government. But within a few decades other voices started to emerge – they are our predecessors.

Many people will remember that Rachel Carson predicted a silent spring due to a decline in birds linked to DDT, but not as many know that she also warned of a fruitless fall, a time when “there was no pollination and there would be no fruit.” This is what we face today.

(Of course, there are even more issues affecting agriculture and bees.  Farm policy, US diet patterns, food growing economics, and specific beekeeping economics are a few.  Remember that the world is complex!  But, I can only tackle so many issues here.  I provided some links for your further research if you are interested.)

What do we do? 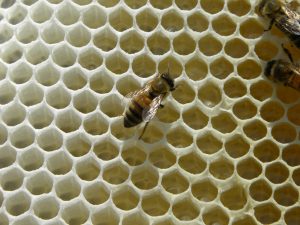 This winter I heard natural beekeeper Ross Conrad speak. He reminded us of the fact that one honeybee can only make 1/12th of a teaspoon of honey in her lifetime to contribute to her hive, which needs about 150 pounds of honey per year. And yet, she does not fall prey to the illusion that what she does doesn’t matter. She does not waver in her work or dedication. She knows her place in this world and embraces it.

We humans are not blessed with that certain knowledge of what we are supposed to do here. But, I believe that we are alive in a time that is calling us to find our place and make a contribution.

I know that we live now with some terrible examples of what humans can do, and we should let that inspire us to be very cautious. But, we’ve also been able to fix problems, such as banning DDT. The great news is that a lot of solutions in front of us will bring only benefits. A sustainable food production system can provide good food for pollinators, grow healthy soil which can pull carbon out of the atmosphere, offer meaningful work for people, and produce much healthier food for all of us.

So, I ask you to consider all these options to help bees: YES – plant for pollinators flowering plants, especially trees (make sure they are pesticide-free!), choose and grow your own organic food, buy local honey! ALSO – take back our food supply and our health from companies who do not have our best interests at heart. Work to curb corporate power (so we can stop these problems before they are started), promote peace, build more democratic institutions, organize your communities, attend rallies.

Don’t just resist – commit to participation and action as part of your life, not a task that will end when one politician or company is defeated. Let’s take back a sense of responsibility and ownership for our lives and communities, shake off the illusion that our actions don’t matter and support each other in creating a healthy world. 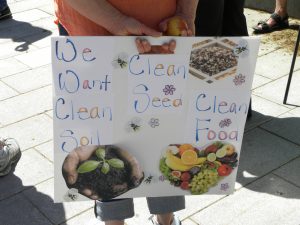 Poster at March Against Monsanto 2017 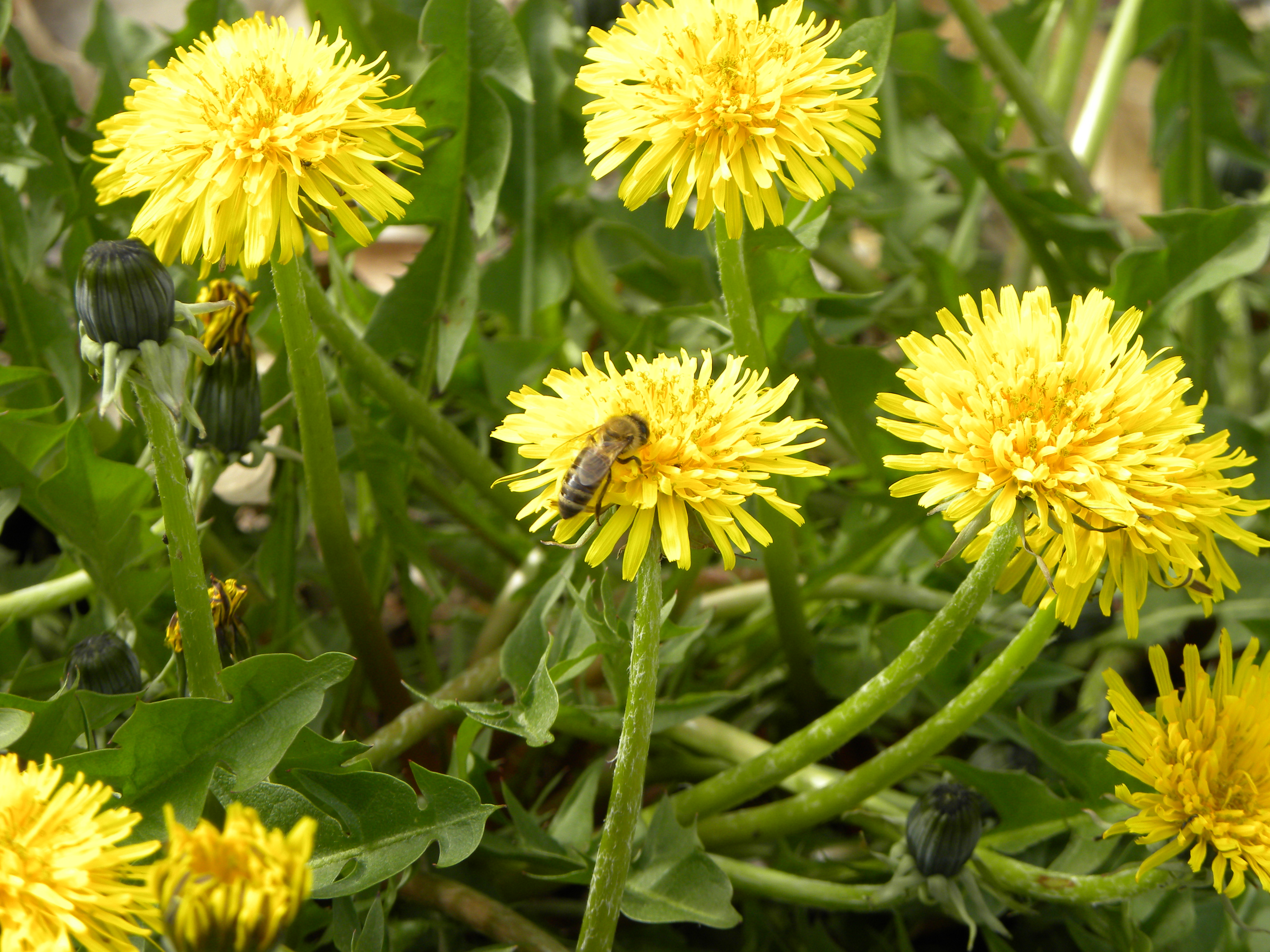