The early winter weather that arrived in November justified my hurried working pace this fall. I’d like to claim an ability to feel the storms coming… but, to be honest, I’m pretty sure that I rush around every autumn. Some years I feel silly for it, but not this one.

The harsh month with some serious cold, very little sun, and snow and ice cut short some of the outdoor work I’d hoped to accomplish and made what had to be wrapped up challenging. Here’s the story…

Our Work in November

Our first priority this month was bringing in the wood we expect to need for the winter. There was also more splitting and stacking to be done. We didn’t quite finish that before the snow made it too tricky to continue. 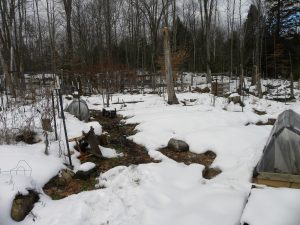 I didn’t spend much time in the garden. We did create a few new beds and refreshed some of the older ones with seaweed, manure and our moldy hay. I can pick that work up again in the spring.

In many permaculture designs and zone maps I see the garden placed close to the house with animals farther away. This time of year I give thanks that I didn’t follow that pattern. I might only enter the garden a half dozen times between November and March. On the other hand, the animals need the same care now as they did in the peak of summer. Bringing them food and water, opening and closing gates and doors, milking the goats.

In fact, we spent even more time with the goats in November since that is our targeted breeding window. I observed them carefully, attempting to discern who was in heat and pair her with the right buck at the right time. This is not so easy. My first goal was to breed Honey, who didn’t get pregnant last year despite our efforts. She spent much of this month living with Marley just in case I was missing the signs. I put Luna in with them as well when she seemed interested. All of this reshuffling of the herd agitates the girls, who complain about it often. 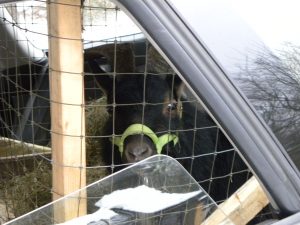 Stinky Buck, Riding in the Car

Later in the month, we brought home our buck named Pan, who spent a couple of years with fellow goat keepers for their breeding program. Driving around with a stinky buck in the car is not one of my favorite things, but we did it! He has caused a great sensation here. For some reason, the girls find him appealing to the point of jumping fences to reach him. He also smashed through 17 gauge fencing and broke a few gates to reach them. He is only supposed to be servicing one of my does, Cocoa, this year but he may have over-achieved. Time will tell, coupled with the detailed notes in my Goat Sex Journal. (Pan Romances Lily – November 2018) 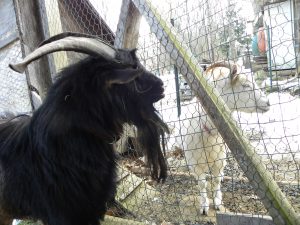 He is an impressive guy, now four years old, with a long beard, gorgeous horns, and emanating a true stench. As far as his personality, he has actually mellowed some. When he was last here at about 2 years old, I was concerned he might be interested in challenging us humans, not just the other goats. He never did anything aggressive – it was more how he was eyeing me at times. But that seems not to have developed after all and he’s quite sweet in disposition now. I was afraid that putting him and our other buck together would be potentially dangerous for them, but in one of his escapes they ended up together for most of a day and no violence ensued, to my great relief. There was a lot of snorting, peeing and flehmening, but even less horn locking than the girls do with each other as a matter of course.

Which reminds me of another job that Steve has been hard at work at, even in the snow: fencing fixes and upgrades. Thanks to Pan, he knew exactly the weak spots in the system.

Most of our animals share our lack of enthusiasm for this early winter: the goats and chickens don’t like stepping on snow and the cats have given up on going outside to hunt. Even our cold-hardy ducks spent a few of the really 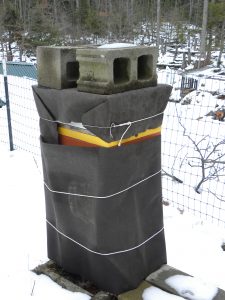 cold, windy days in their coop!

We also shoveled out chicken and goat bedding, hopefully for the last time until spring since we use the deep litter method. I am still harvesting leeks every few days and we did harvest and process two goats. I finished winterizing the bee hives, with help from some beekeeping students.

We have been baking and cooking more elaborately. Given our large amounts of stored pumpkins, we have made a lot of pies. Forget dessert, we think they made a fine breakfast – milk, eggs, squash, a little honey… sounds like a good start to the day to me!

I processed goat fat, and started to clean the dry beans.

I started to catch up on correspondence, get back to writing stories and plan for the new year for Seacoast Permaculture.

We also voted and have spent time reading and thinking about the results. One thing I can say I was pleased about was the increase in the diversity of people elected to office. Understanding the importance of diversity in nature leads me to believe diversity in our human-created systems is a positive step. 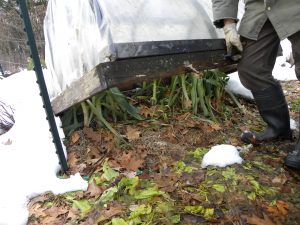 I collected 6 5-gallon buckets of seaweed which the goats have been eating right up (Goats Eating Seaweed). 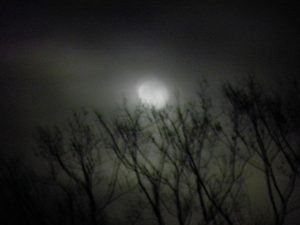 Not Much Sun, But a Beautiful Full Moon in November

We made 175 kwh from the PV solar panels. One of our least productive months since their installation. Wow, we miss the sun!

We found sources for more hay to re-fill the barn. We were able to bring home about two dozen bags of raked leaves from town. We usually bring in a lot more than that, but there was so little dry weather and wet leaves don’t work well for our uses.

I hope to complete a few more projects to wrap up the season, like goat breeding, bean cleaning and wood stacking. A summary of this year’s garden would help me in planning for next year. And the seed and plant catalogs have arrived so it is time to assess and choose! I especially look forward to the coming of the winter solstice to mark the growing of the light and maybe even a sunnier year ahead. 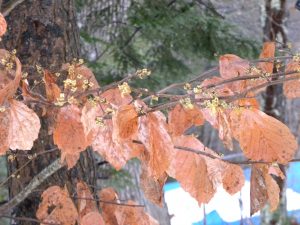 Witch Hazel – One of a very few November Blooms

6 Responses to November at Living Land 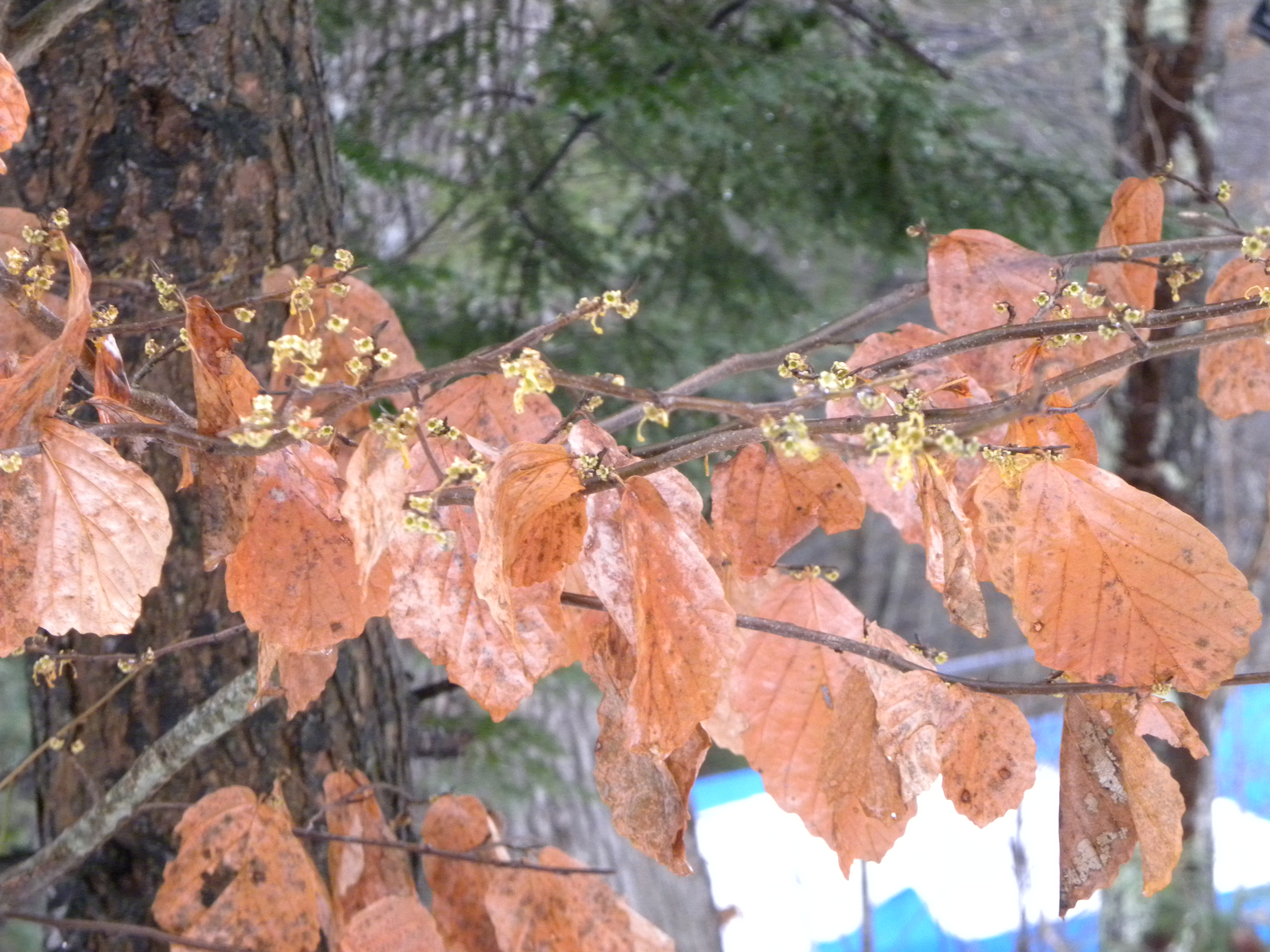