Our Season for Goat Breeding

I know that most of your minds are on the holiday season now, but we are still working on wrapping up goat breeding season here at Living Land!

This year we are breeding Honey and Lily, a mother-daughter team who are exceptionally healthy, easy to keep and milky, to Marley who was bred at Rosasharn Farm, an excellent line for top milk production.

Here is a truth many of us forget in our supermarket world – milk comes from female mammals (mostly – there are species and situations in which males lactate!) who have given birth after being bred to a male. If that sounds painfully obvious to you – well, yeah. If it is surprising to you – you’re not alone and you’re forgiven! Unlike poultry who will lay eggs with or without a male present, milk comes after the aforementioned process.

Fall is the breeding season for most milk animals in the northern hemisphere. Many only go into heat in the fall. Our Nigerian Dwarf goats can be bred year round but even they are clearly more interested in it in the fall. I take that cue from them (Permaculture Principle 1: Observe and Interact) and keep to that schedule. This sets them up to have kids in the milder, greener time of year.

That’s the overview – but how about some details? In this entry I’ll tell you about how we chose our breeding dates more precisely, how to bring together buck and doe, and how to know if it’s been a success.

First an aside – having been raised a modest catholic girl, I am a little shocked to find myself writing publicly about the sex life of anyone – even goats. Some of the terms are different, maybe because I’m not alone in finding it weird, but still, we know what we’re discussing. It is however a completely necessary part of dairy animal keeping so here goes – including videos!

Our girl goats (does) start hanging around the boy (buck) enclosure in September, but we don’t let them in quite yet. We have chosen a later breeding time than is typical in our area. I heard too many stories about frozen kids (baby goats), heat lamps starting fires, and humans sleeping in the barn in the coldest weather. By starting our breeding efforts in November, kids won’t come until April, which is great weather for easy management. This delays our yield (Permaculture Principle 3: Obtain a Yield), but I’m ok with that tradeoff. Through my permaculture lens, observing the problems others were having motivated me to change our behavior to mitigate them (Permaculture Principle 4: Apply Self-Regulation and Accept Feedback).

I want my breeding done by January because the growing light triggers the buck to make less semen, the quality of that semen goes down, and his levels of sex hormones drop. I also want the kids to have time to grow to a good size before the winter sets in. 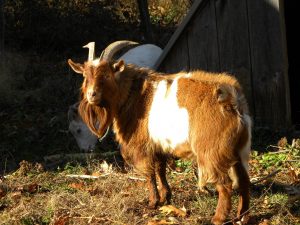 There are two critical factors in making a good choice – the genetics of the buck and his health status.

You want a buck that comes from a good line of healthy animals that give a lot of milk. If he is old enough to have daughters that have proven to be good producers that’s even better. You need to be careful to not breed animals too closely related to each other.

He has to be healthy, not just look healthy. There are a few nasty, incurable goat diseases. You need to insist on seeing test results from the herd the animal you are considering is in documenting the absence of these diseases. I urge you not to buy animals, bring them to your land, or breed from them if you cannot get the owners to supply you with test results from the herd, preferably several stretching over a number of years. 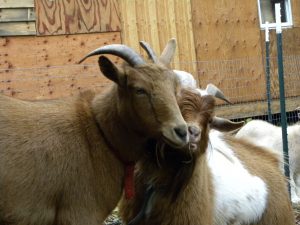 Doe and Buck, Connecting with Kisses

The options for bringing together doe and buck are: driveway breeding, longer-term buck rental, or keeping your own bucks. Artificial insemination is rare to use in small-scale goatkeeping as it takes expertise, equipment and has a low success rate. It isn’t a very natural option, either, so I won’t go into it beyond this mention.

Before telling you more about these choices, here are a few facts to keep in mind: bucks will be fertile during their entire rut season (Goat Breeding – Buck Antics). Does will go into heat (the time period she is fertile) every 20 or so days (each goat is different on how often they cycle) and each heat will last 12-36 hours. Most does show specific signs of heat (tail flagging, vocalizing, personality changes – see my video!: Goat Breeding – Cocoa in Heat), but some do not. Bucks can be difficult to deal with. They can be single- 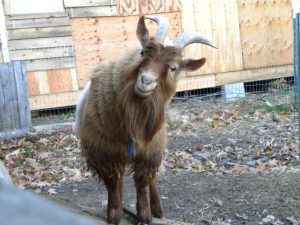 Marley the Buck, Dripping in “Cologne” (see his legs)

minded and pushy about their wish to access the ladies. In our dwarf breed, this isn’t too hard to deal with. They also stink. I mean, really, they smell BAD. In the goat world, a boy’s urine is his cologne and he is skilled at spraying it all over himself. It is an intense and clingy odor. If the computer would let me I’d upload a sample, but that technology isn’t here yet. Come on over sometime, I’ll share!

A driveway breeding means that the doe owner identifies when the doe has gone into heat and drives their doe to the buck’s house to spend an hour or two together in a pen or literally in the driveway on leashes. Experienced goat keepers succeed with this arrangement, but I don’t know anyone new to goats who has ever had it work. You have to be very good at noting the right time in her cycle and dropping everything to chauffeur her. Remember that the window for a receptive “standing heat” can be as short as 12 hours (My video of Lily: Goat Breeding – NOT a Standing Heat).

A longer-term buck rental is what we did the first few years with great success, advised and assisted by Heidi at Tragos Trip Farm, where we bought our original girls. Under her counsel, we kept him for a month to be sure to catch one of the fertile windows for both of them. The first year was very easy – we wanted him to breed with our only two goats, so they just all lived together for the month. The second year we had kept Honey’s daughter but weren’t ready to breed her. Since goats hate being alone, we let Cocoa live with Diableau and just let in Honey when she seemed especially interested in him.

Keeping our own buck is our current situation. At first, I swore we would never keep our own males because of that terrible smell. I couldn’t imagine living with it any longer than necessary. But, I learned that the best biosecurity system meant keeping bucks of our own. I also discovered that outside of the fall rutting season, they aren’t that stinky and ours have good temperaments. We have also been able to keep the males and females separate when not wanting to breed them, which I’d worried about.

Even with our own bucks, we have not always gotten it right. Year one went smoothly, with Pan impregnating Cocoa and Juniper right on schedule. Pan is Lily’s son, Honey’s grandson, so the next year we needed to bring in a new male for breeding. That’s where our current guy, Marley, comes in. He was a late summer

Marley, Not Impressing the Girls His First Season With Us

birth, so during last year’s breeding season he was still very small and not very bucky. Honey and Lily lived with him for a full month and never let him near them. I believe if they could have talked their horrified looks would have been accompanied by the question “what do you think we are, cradle-robbers?!” I knew that it hadn’t worked.  I gave up and took them out on January 1st, not wanting kids later than June 1 and not feeling like anything was going to change soon anyway.

By this fall, he was in his full, urine-soaked glory and they began their efforts to reach him every few weeks. The first tries I just let them in with him for a few hours, hoping my timing was impeccable so he didn’t have time to really cover them with pee. I am milking them after all. However, they both came back into heat, so they are currently living with him for the month.

How do I know when this has worked? It isn’t easy to be 100% sure until close to the end of a pregnancy, but if they stop going into heat, that’s a great sign. Goats do not

She is Not Pregnant – Just Eats Well!

ever look particularly pregnant. A goat’s girth changes dramatically throughout every day as she packs herself with food, then digests. People regularly ask me if they are pregnant after they’ve had a good meal. The kids are pretty small compared to some of their breakfasts. In the last few weeks of a pregnancy, they do tend to look even wider, especially the experienced moms who have, shall we say, lost their girlish figures.

There are some technical options to confirm a pregnancy, none of which I’ve used. An ultrasound machine works but is expensive. There are blood and urine tests available now, but collecting blood or urine isn’t something I would look forward to. So far I’ve been able to tell well enough just by observing.

Good notes taken during the fall then helps determine the possible birthing dates. I stick around watching and listening as much as possible at those times (yes, we set up a baby monitor we can listen to in the house). My estimates are usually close so I have been there for most births.

Because those births in the spring are what all this fuss is about! 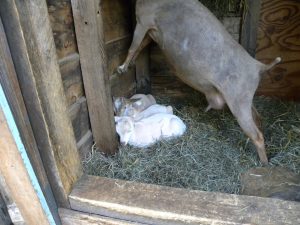 2 Responses to Our Season for Goat Breeding