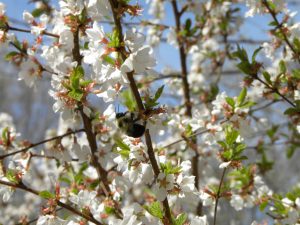 We are currently receiving our first yield of the season from our fruit trees and bushes – nectar and pollen much needed by our bees and other pollinators!

In permaculture design we have a concept called “stacking functions.” We ask for multiple benefits from each element added to the system – we want to do more with less. Rather than narrowly specializing, we ask more from everyone, build on the relationships we create this way, and aim to decrease our workload in the process. The system becomes more efficient by way of complexity.

Oftentimes the various functions are already there, we just need to open our minds to seeing them. Once we identify them, we can then work to better use and enhance them or more deeply understand their value.

When I choose plants to bring into our landscape, there are numerous jobs I’m looking to fill, such as insectaries, pest confusers, dynamic accumulators, nitrogen fixers, fodder and, of course, food for us. Fruit trees and bushes are an obvious choice to give us a great yield later in the season, and a huge boost to nectar and pollen eaters in the spring (video: Bees Visit Nanking Cherry Blossoms). 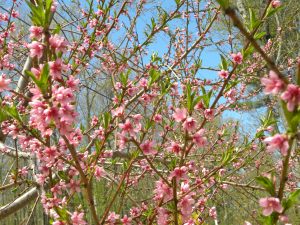 And they really need it. To make one pound of honey, it is estimated that more than 550 worker bees will be needed to visit 2 million flowers. They will fly the equivalent of once around the world to make just that one pound. After the winter, my bees have consumed most of their resources and need the mass blooming of trees and dandelions to get off to a good start. 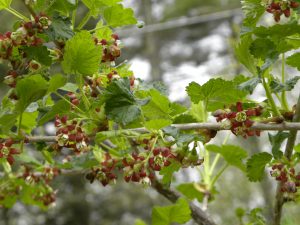 Here are other reasons to love trees… like all plants, they are the true producers on our planet, creating the energy that runs the whole food chain. Then, like all long-lived, woody plants they clean pollution from the air, stabilize soil, cycle water, moderate temperatures, sequester carbon out of the atmosphere, and give oxygen in return. They can offer shade and habitat.

Stacking functions is a useful permaculture lens to develop.

In a mechanistic view of a farm, each aspect is reduced to one use. You have pigs for meat, cows for milk, veggies for human consumption, cover crops and fertilizers to feed the soil, machines to manage the land, and waste products to grapple with.

But in nature (meaning in reality) complexity and relationships are what create health and resiliency.

Understanding that animals also make soil-feeding manure, and that their behaviors can be used in healthy land management leads to systems taking them out of CAFOs (concentrated animal feeding operation) to go back onto pasture with rotational grazing. Increased soil life, better crops, fewer fertilizer inputs needed, and no waste.

A reductionist mindset is often applied to our lives as well – school is to learn information, work is for making money, home is for raising a family, vacation is for relaxing. But, we’re better off when we realize it’s not that simple. 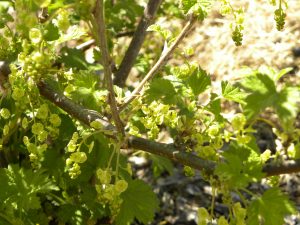 When work is seen as a critical place of social connection, programs strengthening relationships increase satisfaction and performance. Remembering that our homes can also be productive work places can inspire us to develop skills in our gardens, woodworking shops, and sewing rooms. Integrating fun and relaxing activities into our lives rather than just waiting for vacations can make our communities and lives more vibrant.

Meanwhile, I thank my plants for the many ways they feed and support life! 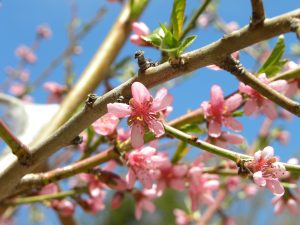 Winter Squash I Have Grown, Respect Where it’s Due 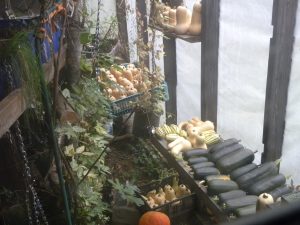 Winter squash (Cucurbita spp.) is an amazing food resource – prolific, nutritious and with a long shelf life requiring no electricity. We humans love it as well as our chickens and goats. Over the past few years I have branched (vined?) out to try more varieties, especially heirlooms, to honor and help preserve what the native people of this region cultivated. Those master plant breeders cared so well for this land for thousands of years, including living through climatically challenging times. We immigrants could learn a lot from them.

Here is a review of our trials so far, starting with our latest finds.

I first heard of this squash in 2018, but it was cultivated by the Seminole people in the Florida Everglades since the 1500s. I came across it in the Fedco catalog’s Indigenous Royalties program. They included a disclaimer that we might be too far north to succeed with this crop, but it’s claimed pest and disease resistance tempted me to risk it. 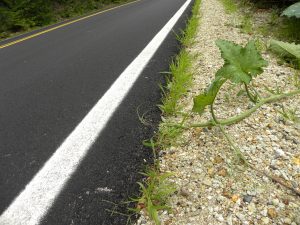 Seminole Trying to Cross the Road

It was slow to get started in the cool spring we had, but once it got going there was no stopping it. It grew farther and wider than I’d planned for or imagined possible. It snaked out into the road, pulled small trees down in its path and sent down roots everywhere it touched the ground. I had to climb into the patch regularly to free my persimmons, jostaberries and beach plums, not an easy feat. The foliage was huge, dense and deep green all the way to our first frost. I never saw damage from vine borers, squash bugs or powdery mildew. 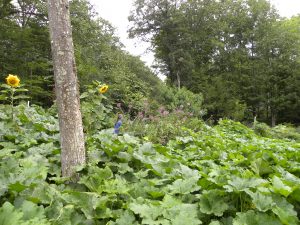 I also couldn’t see much fruit through the greenery, leaving me to wonder if we’d actually have a crop from it at all. But after the frost hit, I ventured into the tangle with 5 gallon buckets, trip after surprising trip eventually bringing in 414#, all from an original 6 planting spots with a couple seeds in each. 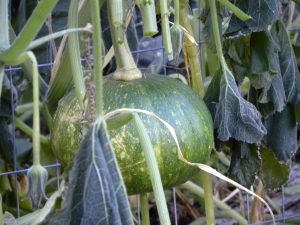 None of it was totally vine-ripened. The small green fruits we used like zucchini and shared with the goats. Any that had started to turn orange I brought inside hoping they would ripen. This was in October. Over the next couple of months, any that showed signs of rotting we cleaned up and ate ourselves or fed to the animals. By January a batch of 50# had totally ripened, living in buckets in our dining room. These can supposedly last for years without even being kept cool. I’ll be testing that and can report back!

As for taste… the immature ones weren’t sweet, but were more nutty and like summer squash. As they ripen they sweeten up. They have made lovely fluffy pies and are especially great for pumpkin bread. Their size of 3-5# each is handy for using in the home kitchen.

I’ll definitely plant these again this spring, but farther from the street!

This heirloom seed came to me from The Piscataqua Seed Project in 2018. It can be traced to upstate New York where it may have been gifted from Native Americans to settlers, then documented in Salem, Massachusetts in 1831. 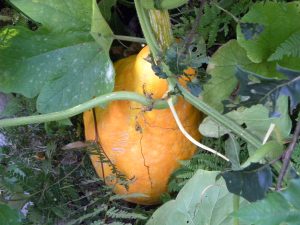 I grew one plant in one of our young orchards. It happily climbed up a small nearby oak. As expected, it made one large fruit, an impressive deep orange 20-pounder. We cracked it open in February and it cooked up sweet and moist. I made a few delicious pies and squished squash dishes. My complaint is the size. Chopping it up and having to process it all at once is not convenient at a typical home scale. If you cook for many people at once this is a great one, which I’m sure is why it is becoming popular with chefs at farm to table restaurants. 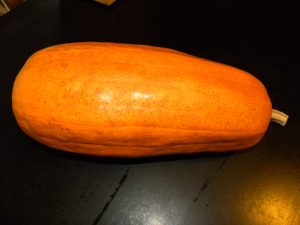 I received seeds for Long Pie at a Seacoast Permaculture seed swap in a homemade envelope with no photo. In 2016 I planted a variety of winter squash, including these seeds, in our front garden and orchard. That turned out to be a big vine borer year. Every few years there is a surge in their population and we lose much or most of our crop. Those are the ups and downs, the boom and bust cycles of nature, which I don’t worry too much about. But one vine kept going after all the others succumbed. It formed long dark green fruits looking like a weird cross between a zucchini and maybe a butternut. I didn’t know what to do with them so left them. 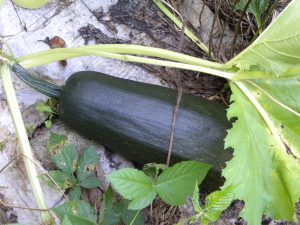 When they started turning orange in the late summer I had enough information to research and realize what they were.

I was already a fan after seeing them shrug off the pest pressure that year. Their long-keeping nature, handy size and shape, and how they sweeten nicely over time keeps them on our must-grow list.  Other local growers have noticed it as well.

Delicatas in Storage in April

It is my personal history with Delicatas that endears them to me. When I was a beginning grower in the early 1990s, farmer David tried these out. Small and sweet with edible skin, they were perfect for me as I was living alone, making meals for one. I love them halved, sprinkled with cinnamon and baked. They are not super pest resistant or prolific, but they keep well for many months.

It is also an heirloom. I buy the Zeppelin variety which can be traced back to 1894, before more recent breeding programs.

Everyone knows Butternut squashes, right? I thought I did, but only recently learned that they are direct descendants of the Canada Crookneck grown by the Haudenosaunee and likely other New England, New York and Canadian tribes (see “Seven Sisters” by Dr. Fred Wiseman). More recently they have been selected for straight necks, but still maintain resistance to vine borers, a trait common to C. moschata.

I’ve grown these for years, and never intend to give them up. This year I grew both Waltham and Burpee, with the Waltham being the better producer. Butternuts have generally been my best keepers, sometimes all the way until July. This year they haven’t been lasting as well, which I expect is because none of them escaped chew

marks from rodents in the fall. Maybe the Seminole pumpkins will outdo them on shelf life, we’ll see. They are sweet and delicious and a convenient size.

Looking to the Past, Planning for the Future

I had thought this blog post was going to be a simple one on a simple topic. However, while writing it, I found myself struggling with conflicting feelings and thoughts. I love this food source and I have a lot of gratitude and respect for the people who developed it. But honestly, it has come to me more through theft and appropriation than gifting.

The case could be made that I shouldn’t be on this land – there are others who should be. But here I am anyway, living in the wake of histories and choices that I didn’t have a say in. And – where else could I be? I’m ½ Irish and ½ Italian with no citizenship rights in either country. There isn’t a clear way to go back.

We can learn so much from Indigenous people. In fact, permaculture specifically looks to cultures who live in good relationship to the land. Many Native Americans are urging the rest of us to learn from them before we destroy us all.

I have no answers here, only questions and struggles. But sometimes hard questions are more important than quick answers.

I plan to continue to grow Native American crops – squash, beans, corn, potatoes, tomatoes and more – and try to give credit where it is due. I will also pay attention to current issues in native communities and find ways to give back for all that I receive.

Here are just a few projects and resources to look to for ways to support indigenous peoples rights.

Grand Canyon Trust (If you went to SELT‘s 2019 Wild and Scenic Film Fest in Portsmouth NH in April you’ll remember the film on this subject: Too Precious to Mine) 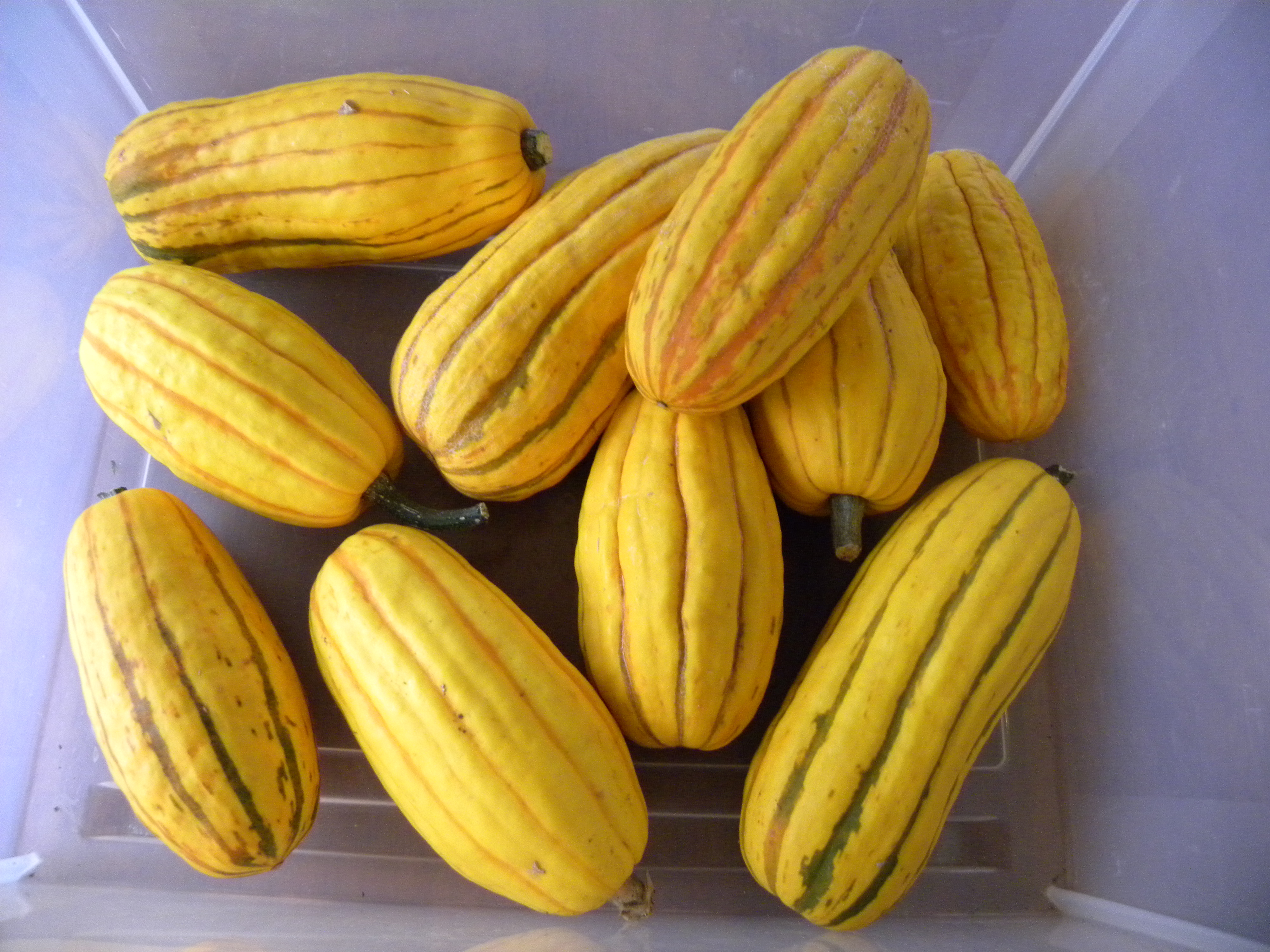