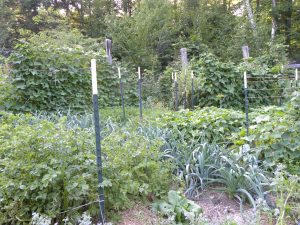 We just finished up our most productive season on our homestead yet, a year that showed how abundant permacultural systems can be. The bounty also kept us very busy with picking, drying, freezing, canning, and root cellaring.

Winter in New England provides a natural space to review, reflect and plan ahead. During the rush of the growing season, it’s a struggle just to keep up with daily chores. I’m grateful for the down-time that lets me practice the first principle of permaculture: Observe and Interact and the fourth principle: Apply Self-Regulation and Accept Feedback. Some of what I note I can’t necessarily plan for – such as how much rain we get – but other information will change what I do – such as I planted too many bush beans for what we need or what my back feels good about.

I’ve begun to think of our years here less as numbers and more by conditions. Like, 2018 was the Year of Rodents & Clouds and 2016 was the Year of Drought. This year, 2019, stands out to me as the Year of Enough Rain, Weird Nectar Flows & Overabundant Veggies.

Last year’s review focused on the gardens. Here I will expand that to include our animals and other projects.

Let me begin again with speaking to problems, starting with the issues I identified in my 2018 Review and how I fixed them or saw them evolve. 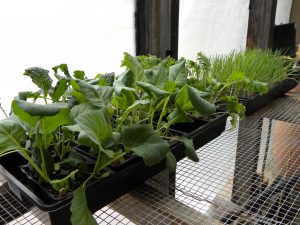 Having learned from my 2018 reflections on our seedling trouble, I did go back to a commercial blend. I found a company called Organic Mechanics that has peat-free seed starting mixes, so at least I was able to address that ethical issue arising with these mixes. It still came in a plastic bag. It worked well, though, so I got off to a good start with lots of healthy new plants.

Rodent pressure was SO much less this year! It’s basic population dynamics – if a group grows beyond it’s ecological limits, it will crash. After 2018’s nearly unbelievable numbers, we had our easiest year yet dealing with chipmunks, squirrels, and voles, our usual competitors. I see this with insect pests and diseases often as well. It’s why I take my time and observe carefully before reacting, especially with any kind of drastic intervention.

We did have a groundhog appear mid-season, hanging out in our lower garden. We failed to figure out how it was getting in and out of the fenced area so we had some damage – it loved my broccoli and cauliflower plants and took bites out of many of our winter squash in that section. Honestly, for a groundhog, it was well-behaved to only make that much of an impact. It just kept me holding my breath for the day I’d go down to devastation! I’ve exhaled mostly by now. 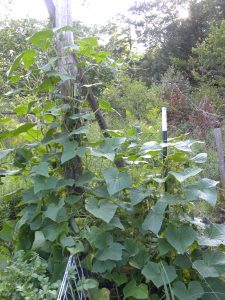 The cucumber disease that I and many others were affected by in 2018 was not a problem this year. In fact, I had way more cucumbers than I felt ready for! Luckily, the chickens and goats are fans of the overgrown ones. The only change I made from previous seasons was to space the vines far from each other around the garden, making it harder for disease to spread. I’m not sure that mattered, though, as so many others reported great yields from their cukes. I think it was a problem that came and went by factors larger than we control. 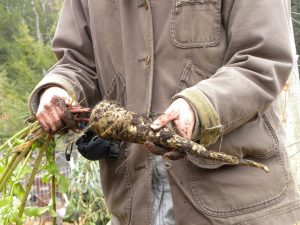 After a few years of germination problems with carrots I seem to have found the right combination for success. First, I planted later. Although carrots, beets and parsnips as “cool season crops” are happy to grow in cool weather, they don’t necessarily germinate well in cold soil. Especially since I am a committed mulcher, seeding carrots in March meant weeks before seeing them, and keeping them consistently moist that long was tough. So, I waited for some warmth and exercised patience, which I really needed given what a cold spring we had. It was May 26 when I finally seeded the root crops. I also put up a shade cloth over the carrots to keep them from drying out as the sun strengthened. It worked! In fact, my carrots came up 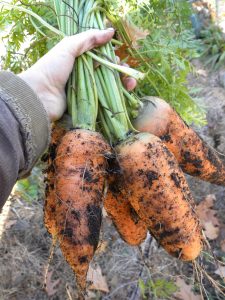 Carrots for the Root Cellar

thickly, and it had been years since I had needed to thin, so my first planting had it’s share of weird twisted, multi-legged roots from being crowded. I was on top of thinning the later plantings which gave me gorgeous results and 195# just of carrots to eat and pack in the root cellar.

The one big problem we experienced this year was a labor shortage. This should not have surprised me, as it is a very common problem on farms. When you are putting a lot of work into a product that is comparatively undervalued financially, there are going to be problems, even with the many labor-saving techniques used in permacultural systems. Steve needed to take more off-farm work this summer, leaving me to do more than I expected and than I was really up for. Any real solution to this needs to be addressed at a societal level, but, meanwhile, I am going to have to rethink some of my choices and be more realistic about my time. I am a great solar-powered, renewable resource, but have my energy limits! 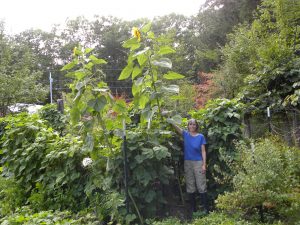 Success in the Gardens

At this point we have about one acre out of our 7 in garden beds full of organic matter, built from the countless truckloads of reclaimed resources we have brought in since we moved here in 2008 (seaweed, coffee grounds, manure, hay and wood chips). The majority of the beds are planted in perennials such as rhubarb, asparagus, berries and fruit trees, most still too young to be very productive. Between the young trees, and in our 3,300 square foot sheet mulched main garden, we plant our annual crops. 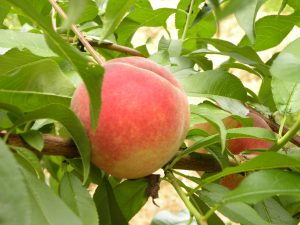 With the regular rain, low rodent numbers, and the soil we’ve built, it was a great year for growing. The trees are also becoming mature enough to begin to bear and we had our first real harvest of peaches, 219#, juicy and delicious.

Here are the veggie and fruit numbers, hopefully presented in an useful way (feedback on that welcome!):

This bounty kept us eating well and was preserved to last for months to come. 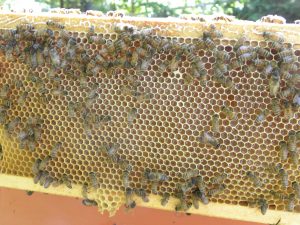 My two hives from 2018 came through the winter strong, ready to take off in the spring. It was a slow start with the chilly weather, but once they had the opportunity they were wonderfully productive. Usually we have a dearth (lack of nectar) in July, but this year that did not happen. Instead, they just kept on filling their combs, to the point that we pulled honey in order to avoid towering hives toppling over, or late season swarms. I also split the overwintered hives to create two more, plus a small nucleus hive. Strangely, though, the fall nectar flow never came. I have no idea why. I gave them back some of the honey frames I’d pulled plus some sugar syrup and hope they were able to build up enough of a population to survive the winter.

We were able to take 165# of honey, so despite the weird season, I consider it a good one. 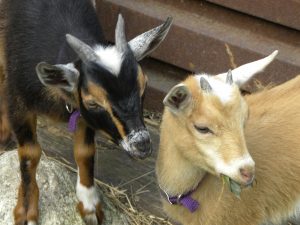 We had another year of healthy, happy goats, including two successful births in the spring. All four kids were sold to other homesteads with natural goatkeeping practices. We helped Gagnons Mountain Homestead start their herd with Luna’s little girl, Jayna, and her whethered brother to keep her company. We love helping others get started, especially folks we resonate with on animal keeping.

I have been milking three animals since the spring, this year’s moms, Cocoa and Luna, and 2018 mom, Lily. We brought in 107 gallons of milk over the course of the year, most of which I turned into yogurt, chevre cheese, and mozzarella.

Our Indian Runner duck flock had some turnover this year. We still had our “old grey duck” from the first batch we brought home back in 2012 but she was showing her age. Over the winter she had seemed arthritic, walking stiffly at times. I thought it kinder not to ask her to go through another cold season. We really liked her and her big blue eggs and wanted to keep those genetics in our flock. So, I put her and our drake together by themselves for a week, took her seven eggs, and put them in the incubator. We find duck eggs much harder to hatch successfully so were delighted when six of them hatched out 28 days later! And, in a poignant, bittersweet coincidence, Old Grey curled up in the pasture the following day and peacefully died, probably not – but maybe on some level – knowing that she had

completed her basic biological imperative to pass on her genes to a new generation. Four of those ducklings did turn out to be female and are now part of the flock!

At that point, though, our drake became too related to everyone else in the flock to breed from, so we are ordering some spring ducklings from Sand Hill Preservation Center to add new genetics to our operation.

Packing Parsnips for the Root Cellar

The root cellar is up and running after about 7 years of intermittent work! This is a free-standing cellar since our house doesn’t have one. Lots of rock moving and masonry was involved, slow and heavy work. We also continued to expand the orchard and garden areas enough that I can order about 10 more trees for spring planting.

And now it’s time for me to do an inventory of our seeds and send in my order to Fedco, as well as orders for trees, bees, and ducklings. Now is also the season to find new and interesting ways to cook and bake all the food we have put up from this abundant year, and thus enjoy eating what’s still fresh and completely local. Watch for me to get back to the topic of food preservation in coming posts.

Happy 2020 – it’s a year of auspicious anniversaries including the 100th year of US Women’s Suffrage and the 50th anniversary of Earth Day… we’ll see what it brings for us all, on the homestead and beyond! 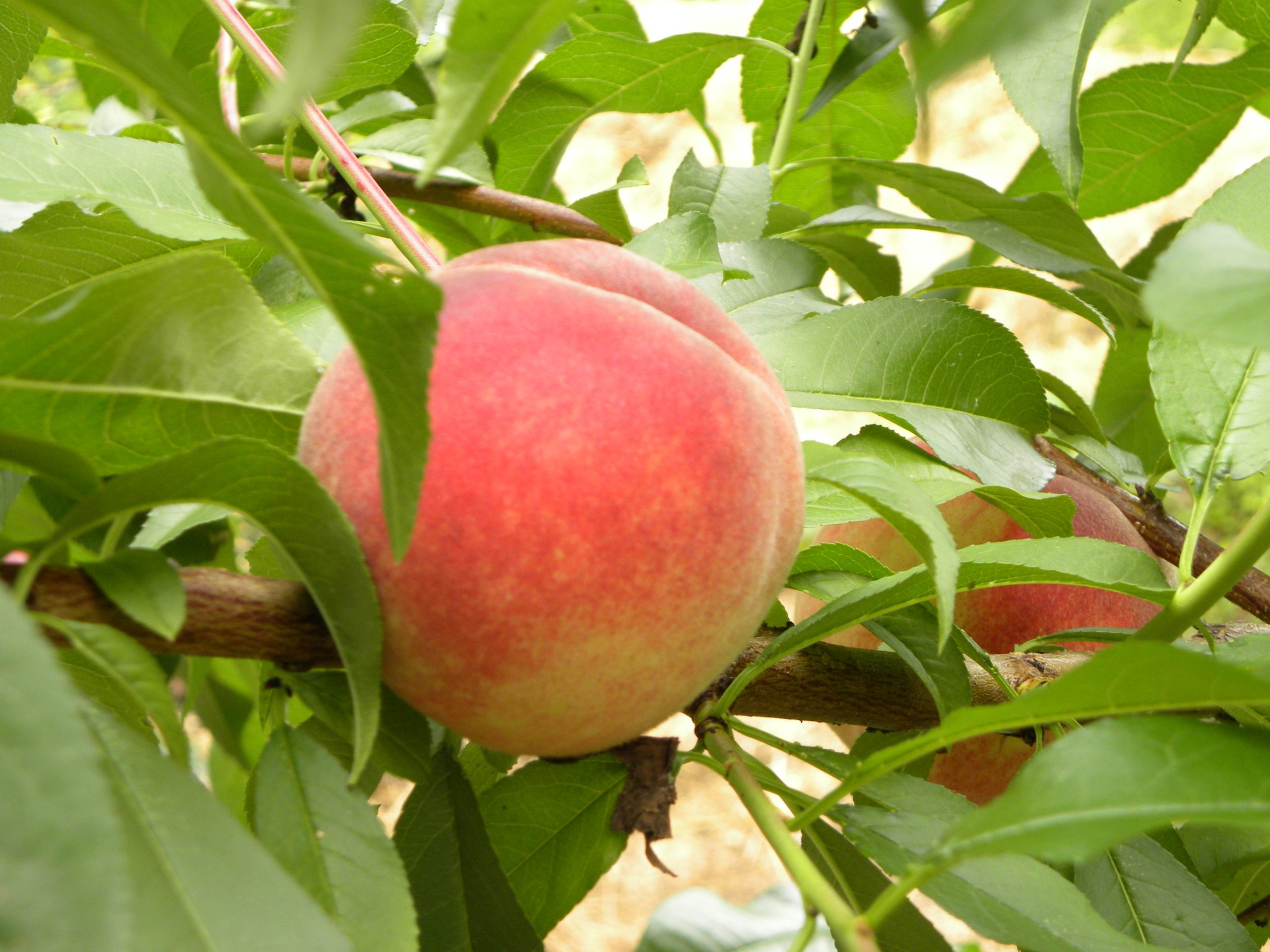