May at Living Land

The start of May this year brought warmth – 80F temps for the first three days. Leaves unfurled, flowers bloomed, frogs, toads and birds sang. Over the month we heard peepers, American toads, then wood frogs. All sorts of birds swooped in: bluebird, goldfinch, robin, phoebe, cardinal, chipping sparrow, and scarlet tanager. The hummingbirds returned to our land on May 11. Ah, Spring!

For all these creatures May is time to get to work, and the same goes for us.

Our Work in May 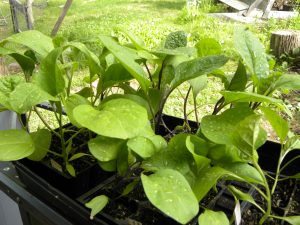 I started another round of seeds using a commercial seed starting mix after March’s poor results. It was too late for some crops, but the real heat lovers like eggplant and tomatoes I start around this time anyway. They did well. I think that I both over-fertilized and over-watered in my previous attempts this year. So, I haven’t found a homemade mix to rely on, but I have a better idea of what the issues are that I need to address.

Steve’s incubator worked! We had 12 chicks hatch and all are happy in the brooder on our porch, growing amazingly fast. We’ve set up another round, this time duck and chicken eggs.

Once I flipped the calendar to May, I knew that Lily was due to kid soon, so we began our constant watch and worry vigil.

Back in the fall, I had trouble getting clear on when she conceived, or if she definitely did. This was our buck’s first real test and I worried that he wasn’t getting his job accomplished. By April, I was sure she was pregnant, I just couldn’t predict exactly when her due date was more precisely than early to mid month.

We set up the baby monitor in the barn, which is better than having to sleep out there, but still disturbs my sleep. Even when not giving birth, the goats make noises – chatting with each other, chewing loudly, scratching themselves against the walls, head-butting. Every time I had to leave for previously scheduled commitments I rushed back as soon as I could. While goats rarely need any assistance with birthing, you don’t want to miss the one time they do. To add to the anxiety, this spring there has been a bear killing and eating goats not far from us, so I wanted to be sure to clean up any birthing fluids to not further risk attracting it. 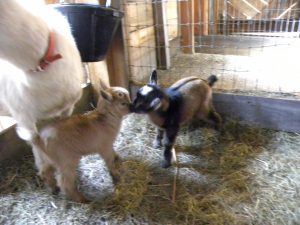 Luckily for my own health, she didn’t make us wait too long, giving birth in the early morning hours of May 6. Now that we are a few weeks out, I can calmly tell you that it was a perfectly normal birth, everything went just as it should, and she produced beautiful twins, a buckskin boy and a chamoisee girl! She cleaned up the kids within 5 minutes with minimal help from me with my towel, they were standing 5 minutes later and had figured out how to nurse in another 15. She’s a wonderful mom and giving lots of milk (most of it going to the kids at this point). If you’d asked me days after the birth I would have said all that, but I would have had much more to say about how completely exhausting and taxing it was – for me!

At the time of the birth, we also moved all the girl goats into the new barn. This again stressed me out more than them I believe. Many tweaks were needed to get the new systems working smoothly but I am now happily milking there, more comfortably than in the previous space.

Our chickens are enjoying their jungle of a yard and the long days outside. Egg production has dropped, though, because 5 of them have gone broody! Which means they have decided to try to incubate eggs rather than lay them. We are not set up to allow this many broody hens to raise chicks. We haven’t decided how to handle all of them yet. Likely, when this incubator batch hatches we’ll set up at least one of them with some hatchlings. No, she won’t care that they aren’t from her eggs or even ones that incubated under her. She’ll be raising chicks and that was her goal.

Ducks at rest after foraging

This is a time of year when I so appreciate our ducks. They are out all over our land every day eating slugs, mosquito larvae and hopefully ticks. Their eggs have deep orange, nearly red yolks, but not having to pick off slugs from my plants is alone worth all the feed they need to eat! We did finally find our missing duck from the winter. Down in the swampy area was a skeleton with a red leg band. We could see nothing from her remains that indicated a predator attack after all. She likely had an illness and went off by herself to die. That’s not unusual in many species, possibly evolved to protect the rest of her flock from what disease she had. We are happy to feel clearer on what happened and grateful the rest of them continue to thrive.

The new hives are off to a fine start, drawing comb, bring in nectar and pollen with productive queens. Their personalities are on the cranky side, though, causing me to need to put on gloves and light my smoker every time I check on them at all.  When my new northern-bred, Russian queens arrive from Cold Country Queens in about a month, rather than make spits I might simply re-queen these to have some safer hives to work in and around. 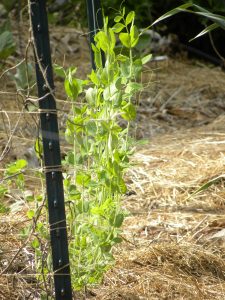 Peas germinate and grow even in cold spring weather

At the start of the month, although air temps were high, soil temps were not. There are not many crops that appreciate being planted into cold soil. I have often tried to stretch the season by earlier planting and seeding outdoors, but without great success. My March and April root crop seedings don’t germinate well even with all the great rain keeping them moist, and even hardy seedlings like kale and broccoli just sit there doing not much until it gets warm. Tomatoes, eggplant and basil lose ground if planted too soon. We were heading into the third week of May when conditions became good and we really got to planting… and planting and planting!

I would have liked to get it all in the ground in just a day or two, but the realities of energy levels and back pain don’t allow for such an overly-ambitious, possibly insane plan given the current size of our growing areas.

This year, I am working harder on record keeping, in part to be able to share here. I still need to work on getting even more specific, but I can give you a fairly detailed report. 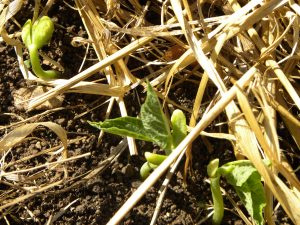 I started off mid-May by planting 30 brassica and 15 lettuce seedlings. A few days later, with Steve’s help, we put 12.5 # of 5 different varieties of potatoes in. I then moved to seeding, first 33 locations for winter squash (about 4 seeds per spot, 6 varieties), and 6 for 3 types of summer squash and a dozen sunflowers. The same day I did a bed of bush bean seeds of 3 varieties, 3 dry bean types and a row of 10 cucumbers. My next planting session I transplanted leek and onion seedlings, celery, parsley, more beans for drying and 5 varieties of tomatoes. I started seeding root crops, too. I had put those off because they are demanding for even a healthy back and I’ve been dealing with pain for a few months. But, it was time so I carefully got to it with parsnips, carrots, beets and radishes. Those seeds took me a few days, a little at a time, to get through. Corn, both Tom Thumb popcorn and Abanaki Calais Flint corn went in after that. My eggplant and basil should be in during the first few days of June. We also completed some more garden bed areas with sheet mulch and hugelkultur techniques, which I seeded with more winter squash, sunflowers and beans.

I’ll continue with successive plantings of beans and root crops for the next couple of months.

Now we hope for appropriate weather including precipitation, and not too much predation by our local wildlife!

Our perennial crops have a real head start on any of the annuals.  Examples of these are rhubarb, asparagus, nettles, and herbs which we ate lots of in May.  Many of our fruit varieties flowered this month and look to be set up for a productive season.

I continue to make cheese and yogurt with the extra milk coming in. 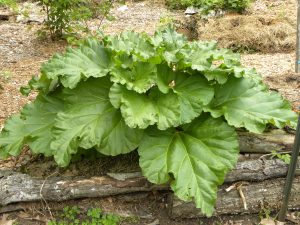 Outdoor harvest has started. We picked 7 pounds of rhubarb, 3 pounds of nettles, and lots of pinches of chives and oregano.

There are still canned fruits, frozen and dried veggies.

Our solar production was down from other years because of how many cloudy days we experienced (no, it wasn’t your imagination, it really was another grey month!).  We made 614 kwh, which covered our needs and did start adding to our credit line with the power company that we’ll draw from during the shorter days of winter.

Looking Ahead to June

Everything will grow! What look like empty garden beds now will fill in, animal babies will be teenagers and I’ll be fighting back some plants threatening to overwhelm their neighbors. Great abundance expected! 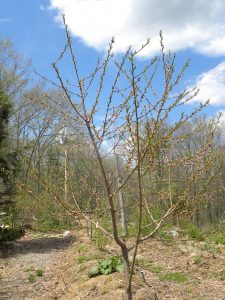 Peach tree in early May 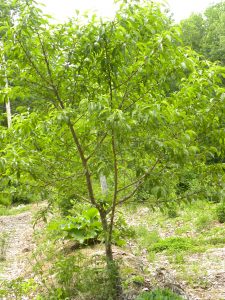 Peach tree in late May

4 Responses to May at Living Land 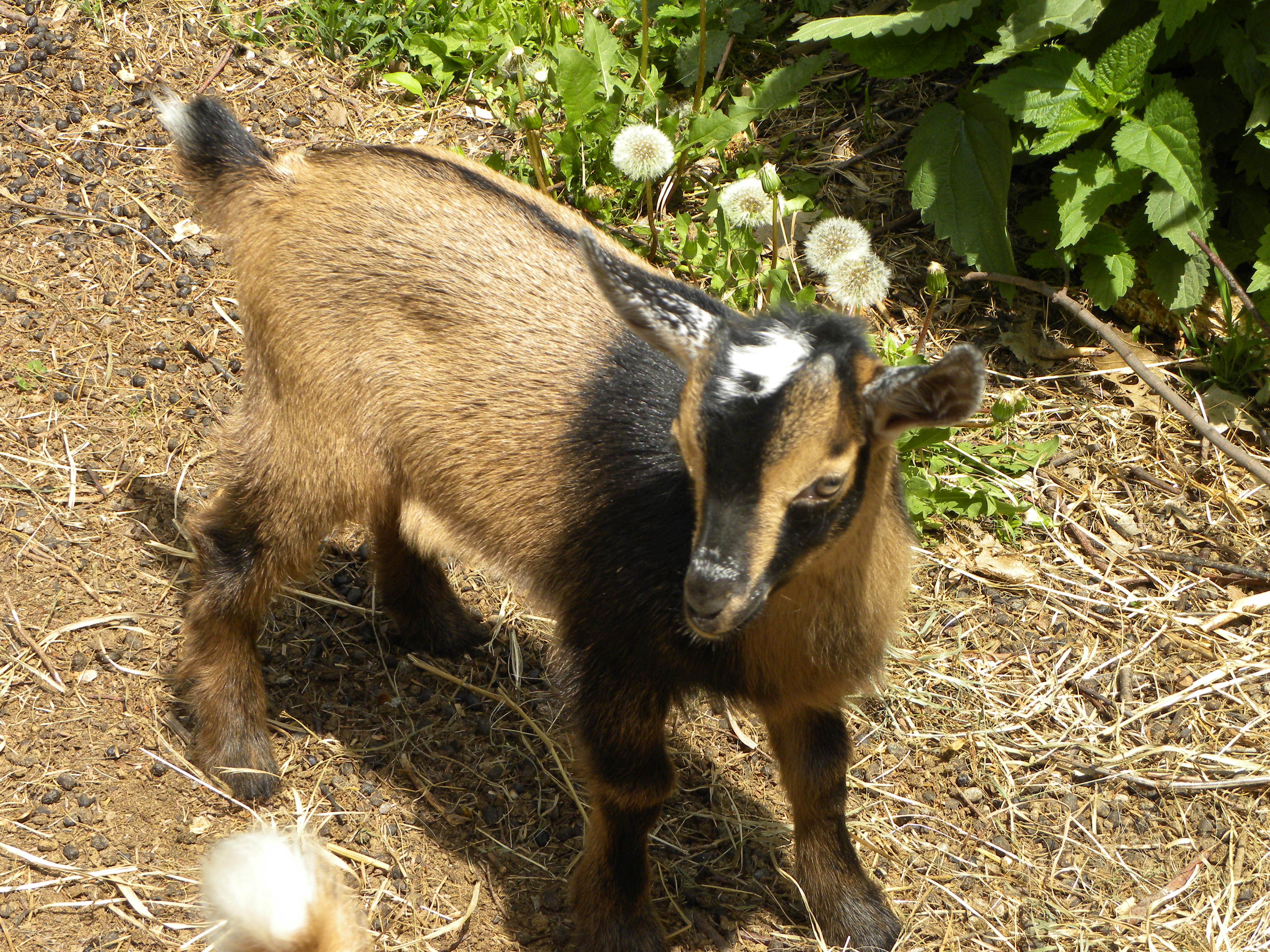