In August we brought two new boy goats onto our homestead. We do this every few years in order to avoid inbreeding in our herd. Over the winter we researched goat farms with different genetics from our animals who shared similar values and practices. We wanted them to allow the kids to be raised by their mothers, to keep the goats horned, to minimize medications and to breed for a good milk supply. When the kids were born in the spring, we checked them out online and reserved two: a buckling from their best milker for breeding and his polled brother, who would be wethered (neutered), to keep him company.

We manage our herd to maximize environmental sustainability and the well-being of the animals. To me, their well-being includes paying attention to their social needs. I know that some people think I’m silly, maybe even “not a real farmer” because of this. However, so many of the problems people tell me about their goat-keeping attempts trace back to their not understanding those particular needs. One of the most basic of those is that as herd animals, goats should not be alone. This is why I don’t sell goats singly, and why we brought home two when we really just needed the one buck.

The farm we were buying them from is two hours away from us. It was a fine trip there, listening to Sproutlands by William Bryant Logan. On the way back, though, each in their own dog crate separate from each other and taken away from their home, the little guys had many loud, scared complaints that I tried not to let completely break my heart. 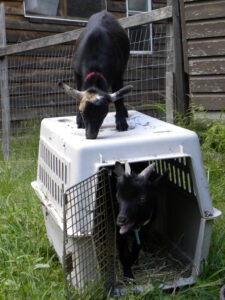 When the boys got here, they needed to be separated – quarantined – from the other goats. Although the farm they came from is reputable and does the appropriate disease testing, sometimes issues are missed and we take biosecurity seriously, prevention being worth so much more than cure. The newcomers are supposed to be adding value to the herd not infecting them with diseases or parasites. Also, giving them time to get to know the other goats from afar makes for a more

peaceful eventual integration. These two would be going to live with our other two boys, who were years older and at least double their size.

So, we fenced off an area and set up a shelter with food and water and bedding. I was proud of the little home we put together. However, they had other priorities. From the moment they got here their focus was on our resident goats. The boys called and called to them, stood looking at them, and slept in the corner of the yard that was closest to them despite how unsheltered it was and its lack of food, water and bedding.  Listen to them here:

I wasn’t terribly surprised by this behavior, figuring they are herd animals and thus want to be with the rest of the herd.

Right around this time, I happened to watch a talk from Biodiversity for a Livable Climate entitled “How Animals Shape Ecosystems” featuring Carl Safina talking about animal cultures. He mentioned programs that raise endangered animals then release them into the wild and how much more successful they are if there are still some wild animals of the same kind there for the newcomers to learn from. The way he defined “culture” amazed me. Here’s a quote from his Living On Earth interview: “Culture is the behaviors, the habits, and even the attractions that we learn socially and that are transmitted socially. The amazing thing to me is that, whether it’s human, modern, Western technological culture, or whether it’s sperm whales, culture basically does the same things for social beings. It answers the question of, how do we live here, where we live?”

My shortened version is: Culture is how we learn to live successfully in our specific place on the planet.

Suddenly, my view of what the little boy goats were doing

The herd likes to be together

took on a deeper meaning. They weren’t just looking for safety in numbers, they wanted to join the existing group to learn from them how to successfully live in this place that was new to them.

It also shifted my view on current human cultures. Previously I thought of culture as a collection of stuff (music, dance, dress, etc) that people in a place ended up doing that became important to their group identity. I appreciated and found the diversity fascinating, but saw it as somewhat ephemeral and random. Now, I see that those acts and items are an expression of what culture really is – an understanding of what to do, what to eat, what to wear, how to work together and connect that helps a group fit sustainably into a particular place (Darwin’s survival of those who best fit into their environment comes back to us here). I see also that the way so many of us have been forced out of our traditional places has us confused.  Our carefully created ways of living don’t necessarily apply to our new environment, but the work of developing new strategies takes time – and sometimes fails, especially if we cannot connect with those who have belonged to that place before us.

Maybe this is part of the reason why so many cultures right now are dysfunctional enough to not live up to the title of “culture” as they seem to teach people ways of being that actually destroy our ability to survive. It also sheds more light on why Indigenous people comprise less than 5% of the world population but protect 80% of the Earth’s biodiversity. Respecting and protecting their rights, saying no to market schemes that push them off their lands, and humbly turning to them as our teachers and leaders could be a key to our surviving and thriving – our goats could tell us that! 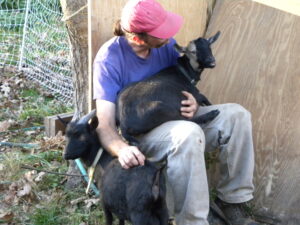 In the case of our new guys, we had good reason to keep them by themselves for awhile, and we were here to help them survive during the quarantine period. We took our cue from them about what they most needed and created a plywood lean-to in the spot they picked up against the barn. After two months with no health concerns coming up, we shifted fences so they could have some nose-to-nose contact with the boys they would eventually live with. The little buckling had a romantic day with Diana which seems to have resulted in a pregnancy. To be extra safe, Steve built a secondary shelter in the older boy’s yard with entrances too small for the adults to fit through. When we actually did bring them

Shelter Only Accessible By Smaller Goats

together, there was a lot of sniffing, a little pushing and shoving… and then a lot of welcome quiet for me! After months of those little boys calling and crying and worrying me that something was terribly wrong with them, it seems they really did just want to be with more of their own kind. Phew!

As a bonus, I have another book to add to my winter reading list: Becoming Wild: How Animal Cultures Raise Families, Create Beauty, and Achieve Peace. The promise of more rest and great learning makes the cold and dark less daunting as we enter December.

News and global issues are impossible not to stress about right now. Many of us are taking action for change, which I see as the best antidote to despair (as Joan Baez said). However, as is always the case, grief and joy exist side by side in the world and in our lives. So, I thought taking time here to marvel at the turning of the year to Spring and the reemergence or start of new life would be worthwhile.

One of my winter reads was Sproutlands: Tending the Endless Gift of Trees by William Bryant Logan. It’s a beautiful book that teaches about the skills of coppicing and pollarding and other ancient tree management techniques while celebrating the people and cultures who live or lived in such a sustainable, symbiotic relationship with forests.

Plants, especially perennials, showing us how well they weathered another winter. 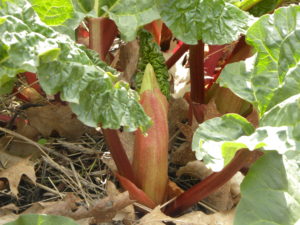 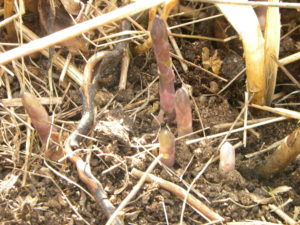 Blossoms setting us up for lots of summer fruit. 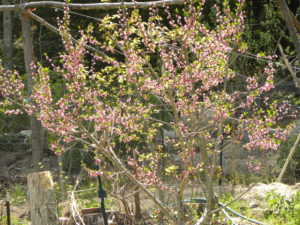 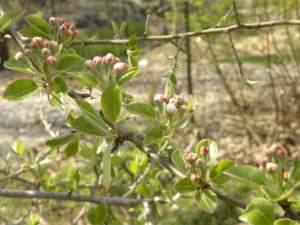 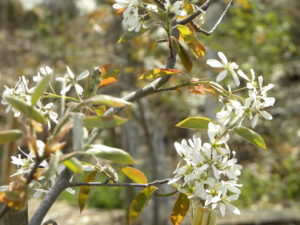 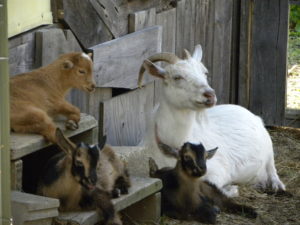 Lily with her two kids and Georgia’s kid (Lily’s grandson), too!

Nice green pasture to rotate for the goats to eat – grass into milk. 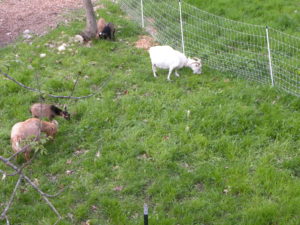 New pasture, just opened to the goats in our rotational grazing system 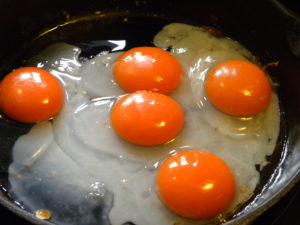 Of course, the wheel will keep on turning and there will be endings and deaths, which are a lot harder for me to write about even though they are just as sacred and worth holding close. Maybe I’ll speak to that one of these Falls.

Meanwhile, happy season of growth and fertility! Let us remember to be grateful for living in a world that gives us so much. May we emulate the persistence and resilience of the trees springing back after a hard winter or an intense pruning. 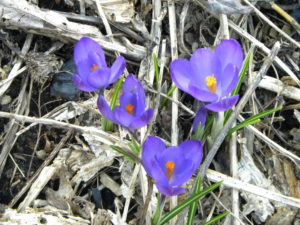 NOFA-NH’s Mentor of the Year 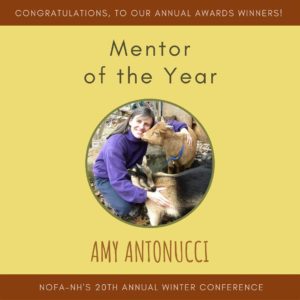 I was touched to receive the 2022 Mentor of the Year Award from The Northeast Organic Farming Association of NH at the winter conference in February.

In 2017 I was given the Leading Organic Gardener of the Year award, also a huge surprise and honor. I work very hard in my garden, physically and as a constant learner. The inches of healthy soil I’ve helped to grow are part of the legacy I will leave behind when I die. Growing our food here in a sustainable way is also an aspect of how I live in the world in a responsible and giving way: problems such as chemical contamination, food miles, and soil loss are avoided in what I grow here.

So, I will always be proud of being named Leading Organic Gardener of the Year. I think, though, that I am even more pleased by being recognized as a mentor.

It wasn’t long into my time working on a farm that I realized how much I wanted to empower others to grow, too. I loved the work and knowing that what I did was good and useful to my community. However, I was even more excited to hear from people about their attempts to do it for themselves.

I came to farming after getting a degree in Women’s Studies at UNH-Durham where I learned to see a larger picture of the world and how things are connected and influence each other. I became an activist for women’s rights, peace and environmental health where I further saw the power of working together collectively.

I was thus less interested in growing for people than growing with them, and building a movement of human beings who see that they depend on the land around them for nourishment and life.

As I write this, one of my favorite songs by Sweet Honey in the Rock is “Ella’s Song” comes to mind.  It includes this stanza:

“That which touches me most is that I had a chance to work with people,
Passing on to others that which was passed on to me.”

So much of my learning about permaculture and food growing happened at NOFA conferences and classes. I am happy to continue to pass that on and moved that my work has been seen. 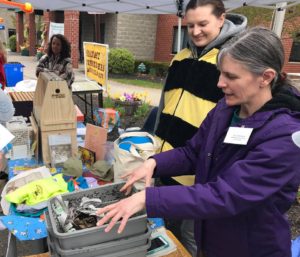 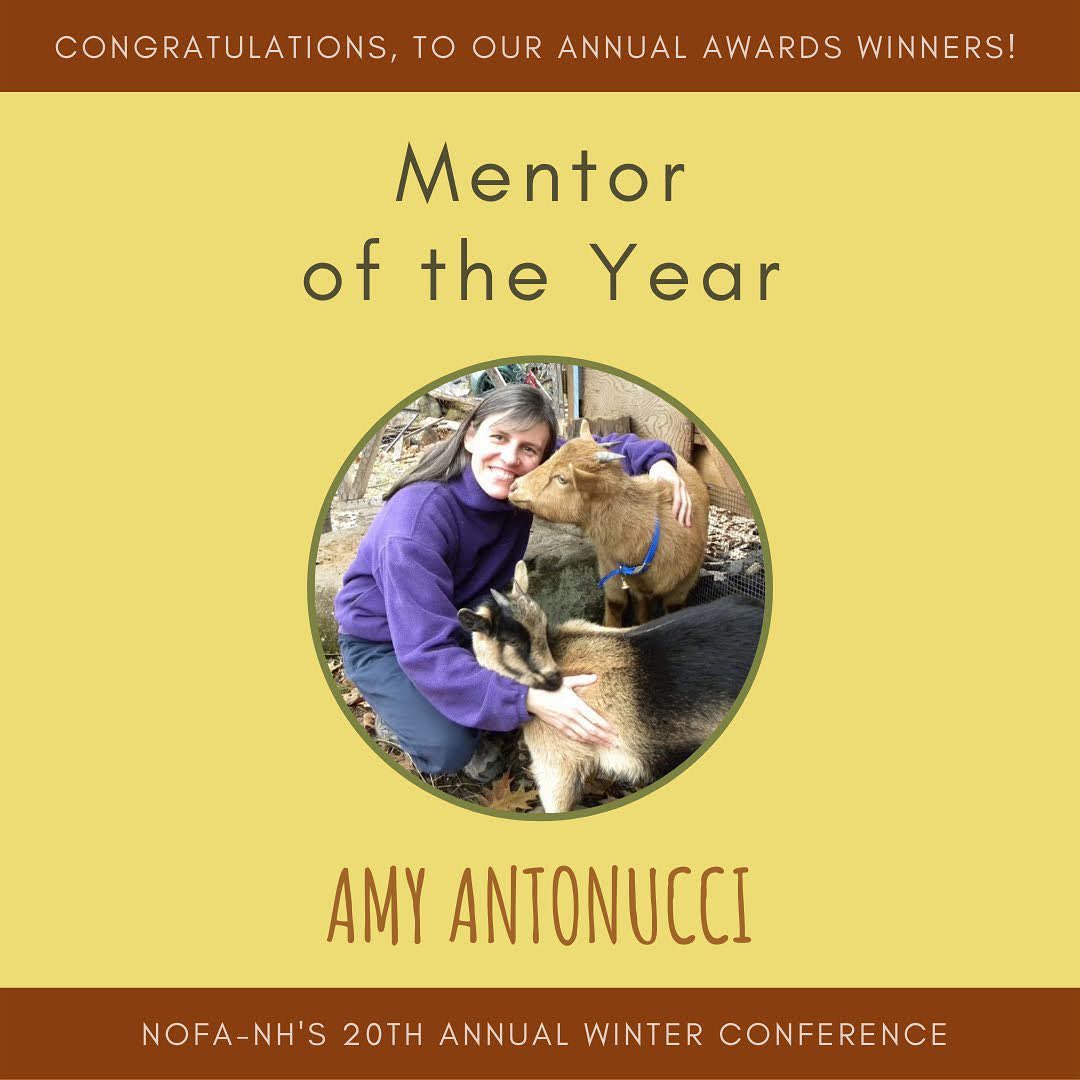